Steve Hansen: No disrespect to Scotland but All Blacks have own agenda 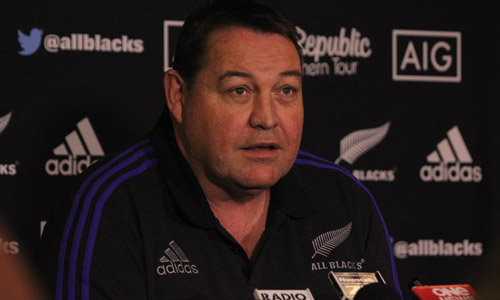 Steve Hansen insists there is no disrespect towards Scotland after making 13 changes to the New Zealand team for Saturday’s clash at BT Murrayfield Stadium.

The All Blacks head coach has come under fire over his team selection for their third match of a four match tour, but has played down concerns.

“We’ve got a lot of respect for Scotland rugby, but we’ve got our own agendas that we have to live by,” Hansen said.

“People are totally misreading the situation if they think we don’t respect them.

“Our expectation is that these guys will go out and play to the standard that the normal 23 put out in the big Test matches.”

Only captain Richie McCaw and Ben Smith survive from the XV that started last week against England, but both have switched positions in an experimental side with McCaw starting at blindside for the first time in his international career, while Smith switches from the right wing to full-back as Colin Slade – usually a 10 or 12 – comes in at 14.

Looking at the history books, there may be good reason for Hansen to rest his first-choice players. Scotland have never defeated the All Blacks in 29 attempts and their last meeting at Murrayfield in 2012 was a 51-22 win for New Zealand.

The Dark Blue won their last outing 41-31 against Argentina in their first viagogo Autumn Test, and it was an attacking performance which made the rugby world sit up and take notice, even if there were familiar issues in defence and a lack of discipline at times.

With New Zealand heading to Wales for their final tour match next week, there is a caution about fatigue at the end of the All Blacks’ season after many of their players went through the June series then the domestic Super Rugby season before retaining their Rugby Championship title last month, and arriving in England last week via a match against the USA in Chicago.

Hansen also had an eye on next year’s Rugby World Cup campaign and is already considering the permutations, making reference to their last pool match clash with Tonga in Newcastle on 9 October.

“Scotland and Tonga are probably comparable when Tonga’s at their best,” Hansen added.

“There are a lot of things that are similar.”

While his squad to face Scotland is experimental, there is a very deliberate method to the perceived madness: Hansen wants to see if some players, like McCaw and Slade, are capable of providing solid options in multiple positions with limited places.

“If we go to the World Cup, we need to have players like that,” he said.

“There’s only 31 spots so you have to have someone with utility value.

“Sladey gives a genuine challenge to someone like Beauden Barrett, who is a utility player as well, for the World Cup.

“The more people we’ve got who can be utilities, the more options we’ve got when we come down to pick the team.”

Dan Carter recalled as All Blacks make 13 changes for Scotland