Romelu Lukaku and Sylvain Distin were getting into the festive spirit on Instagram as Everton began their countdown to Christmas.

The big day is a mere 35 days away, and with Xmas decorations springing up across cities and towns in England, Everton decided to kick-start their festivities.

And the Toffees broke from Christmas’s traditional red-colour theme to give Distin and Lukaku some blue Xmas jumpers for their segment on Everton’s official channel.

However, Belgium international Lukaku clearly isn’t a big fan of Christmas crackers when the 21-year-old tucks into a turkey and all the trimmings on 25 December as he struggled with some of the jokes.

Lukaku posted on Instgram: “Christmas jokes coming up on the website this me and sylvain distin part! #EFC #DidntUnderstandSomeOfTheJokesTho.. #BlueCrimbo” 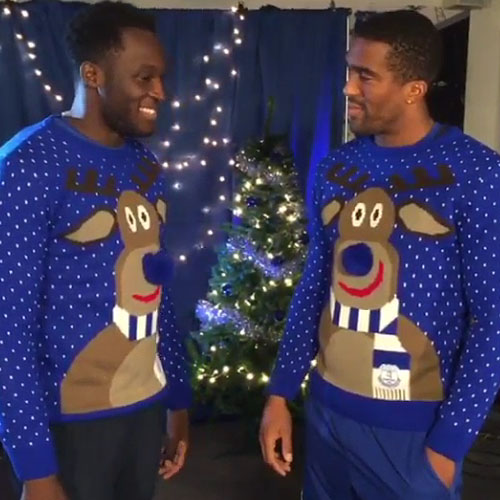 Lukaku has scored four goals in 11 Premier League appearances for Everton after his club-record £25m move to Goodison Park from Chelsea in the summer.