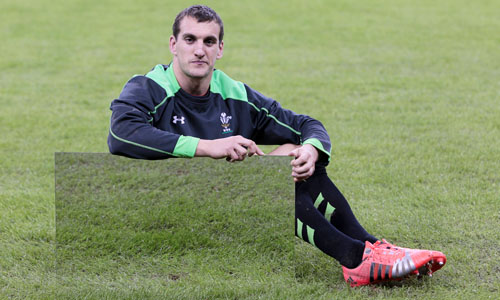 The Wales head coach has also heeded public demand and given Ospreys half-back combination Dan Biggar and Rhys Webb the reins after their eye-catching exploits for the Guinness PRO12 league leaders as Wales look to give confidence a boost with a long-awaited win over a southern hemisphere side.

Injury issues at centre with Jonathan Davies and Scott Williams not risked also sees powerful Northampton Saints winger George North switched to outside centre – a position from which he scored four tries against the Ospreys in the European Champions Cup last month.

“Injuries in the midfield means we get to see Jamie and George line-up together there again,” Gatland said. “We were pleased with how that went earlier in the year.

“We have been impressed with the form of Rhys and Dan at half-back for the Ospreys so it will be good to see them together on this stage again.”

Wales have lost their last eight matches against the Wallabies, but only by single-figure margins.

And there is a belief in the camp that they can finally grab a win after coming too close too often before throwing away wins, as was the case in their last outing as a late penalty try condemned them to a 31-30 defeat against South Africa in Nelspruit back in June.

“We have spoken a lot about this autumn and the year ahead and we are really excited to kick off the campaign this weekend,” Gatland added.

“We have had a couple of very hard weeks at training, the squad have been put through their paces but come have come through well.

“It’s good to be able to bring back a number of players who missed the last two tests and they add to what is a very experienced side.

“The last few outings against Australia have been extremely tight, we are expecting the same this weekend and it’s going to be another huge battle, but it’s a challenge we are really looking forward to.”

With North outside Jamie Roberts in the midfield, Scarlets full-back Liam Williams switches to the left wing as Halfpenny slots into his customary full-back position after missing Wales’ last three internationals, while Cardiff Blues star Alex Cuthbert continues on the right wing.

Up front, Bath prop Paul James continues at loosehead prop alongside Hibbard, the hooker, and Scarlets tighthead Samson Lee, who gets the nod over club team-mate Rhodri Jones.

Ospreys captain Alun Wyn Jones, who captained the Lions to victory over Australia in 2013, takes his familiar place in the engine room alongside Scarlets lock Jake Ball, while openside flanker and captain Warburton is joined in the back row by familiar faces Dan Lydiate on the blindside and Taulupe Faletau at number 8.

After their 40-36 win over the Barbarians at Twickenham on Saturday, new Wallabies head coach Michael Cheika will name his team on Thursday.