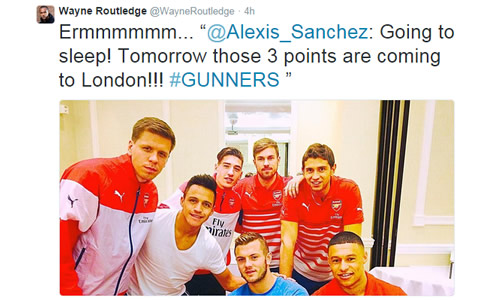 Wayne Routledge couldn’t resist a dig at Alexis Sanchez on Twitter after Swansea City’s 2-1 win over Arsenal on Sunday.

Garry Monk’s Swans secured a 2-1 victory over the Gunners at the Liberty Stadium as Arsene Wenger’s men slumped to their second league defeat of the season.

Sanchez had given Arsenal a 1-0 lead in the 63rd minute but the home side secured the win after goals from Gylfi Sigurdsson and Bafetimbi Gomis in South Wales.

The Chilean had taken to Twitter on Saturday evening to share a picture of him and his team-mates along with the message: “Going to sleep! Tomorrow those 3 points are coming to London #GUNNERS!”

But after the defeat, Routledge retweeted the post and wrote: “Ermmmmmm…”

The 2-1 loss left Arsenal 12 points behind leaders Chelsea after 11 games heading into the international break.

Per Mertesacker: Arsenal have to play serious football