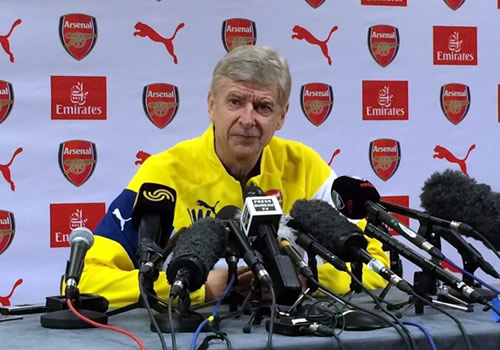 Theo Walcott is unlikely to be available for Arsenal’s clash with Manchester United at Emirates Stadium on Saturday, Arsene Wenger has revealed.

The 25-year-old is yet to start a game for the Gunners this season following his lengthy lay-off due to a knee injury.

Wenger also revealed that striker Danny Welbeck will undergo a late fitness test after picking up a minor hamstring problem while on international duty.

Wenger said: “Everyone has come back [from international duty] in decent shape. We have to check in with some players this morning, so we have lots to check today.

“When players go away and have positive experiences it can benefit the clubs when they come back.

“I don’t think he [Walcott] will be available tomorrow [and Welbeck’s] fitness will depend on the medical assessment this morning.”

Striker Olivier Giroud is back available after recovering from a broken leg ahead of schedule.

“The surgery when well and there were no setbacks,” Wenger said of Giroud. “He is very solid and has a positive mentality – that helps.”