Daniel Sturridge is ready for 'another week of double sessions'

Daniel Sturridge has rubbished media reports that the injured Liverpool striker partied with rapper Drake in Los Angeles until the early hours of Sunday morning.

The England international has travelled to USA to undergo rehab on his troublesome thigh problem, which, along with a calf injury, has kept the forward sidelined since September.

If you don’t hear it from me or anyone associated or see pictures. Don’t believe it

On Sunday, the Sun reported the 25-year-old Liverpool star had enjoyed a night out with musician Drake, suggesting that he was taking his eye off the ball in America.

However, Sturridge, who scored 21 goals in 29 Premier League appearances last season, took to Twitter to emphatically quash the media outlet’s claims, adding that he is working on his recovery.

Sturridge wrote: “I go to drakes to visit him and catch up and I went for dinner with my friends and I’m supposedly I’m partying!! Really??

“Looking forward to another week of double sessions.

“If you don’t hear it from me or anyone associated or see pictures. Don’t believe it…. Love my fans…”

On Saturday, Sturridge uploaded a photo to Instagram to show that he is on the road to recovery as the Liverpool striker trained in LA on Saturday. 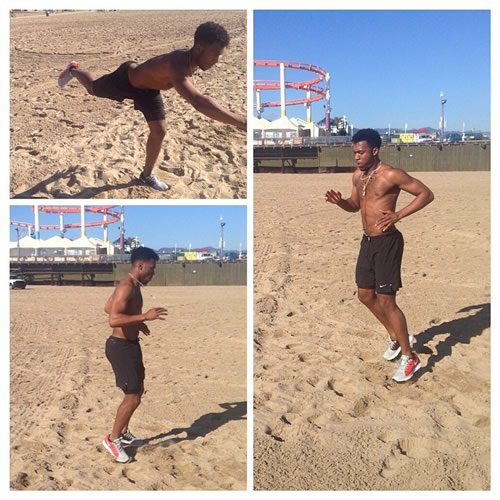 Sturridge posted: “Shame about the result today with the lads. I watched from here. Just finished training on the beach with Ruben. Working hard to get better each day.”