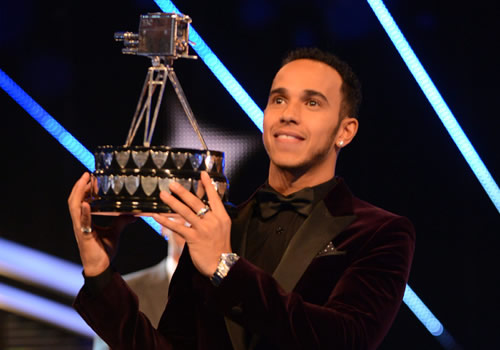 The 10 nominees for the BBC’s spectacular annual celebration of sport made for one of the most diverse shortlists in the history of the competition, but the favourites were very familiar names indeed.

Lewis Hamilton, who won his second Formula 1 world title only last month, had been twice runner-up for the prize, while the hot favourite, Rory McIlroy, who won three of golf’s most prestigious titles this year, had twice before been a nominee.

Sure enough, these two topped the voting, but it was Hamilton who came out the winner the Sports Personality of the Year with almost twice the support of McIlroy and more than a third of the 621,000 votes cast by the public.

Third place went to 41-year-old Jo Pavey, who became the oldest ever female European athletics champion. She won the 10,000m title in Zurich 10 days after winning bronze in the 5,000m at the Commonwealth Games.

Pavey only returned to the track in May, eight months after giving birth to her second child—and was still breast-feeding in April—to win the British 10,000m Championship. Her story of perseverance—Pavey did not expect even to make the British squad, let alone win a medal—clearly struck a chord with the public, as she scored almost 100,000 votes.

Pavey was one of five women to make the short-list—a significant improvement after much criticism of the BBC last year when only two made the 10. And all of them followed in short order behind Pavey.

Fourth was Charlotte Dujardin, who won two gold medals at the World Equestrian Games to become the first Briton to be Olympic, World and European champion at the same time. She was also named the 2014 Sky Sports/Sunday Times Sportswoman of the Year last month.

Fifth were Kelly Gallagher and Charlotte Evans, who joined forces to become the first UK athletes to win a Winter Paralympic gold medal. Northern Irish skier Gallagher and her guide Evans won the visually-impaired Super-G in Sochi. In competition, they communicate via Bluetooth headsets as they travel at speeds of up to 100km/h.

Sixth was Lizzie Yarnold, who won GB’s only gold in the Winter Olympics, in skeleton: Her winning margin of 0.97sec was the largest ever.

The remaining nominees, in descending order, were:

• Max Whitlock, who won multiple gymnastics medals in the World, European and Commonwealth Championships;
• Gareth Bale, who scored 22 goals in his debut season at Real Madrid;
• Carl Froch, who retained his IBF and WBA super-middleweight titles; and
• Adam Peaty, a double Commonwealth gold medallist and a four-time European champion in swimming.

The stunning venue for event was familiar to several of the nominees: the SSE Hydro in Glasgow hosted netball, boxing and gymnastics during the Commonwealth Games, but this marked the first time the BBC awards had been presented north of the border—in the year when the Ryder Cup was also held in Scotland.

While McIlroy did not pick up the main title, however, the Ryder Cup coach of the winning Europe team, Paul McGinley, did win the Coach of the Year Award.

And the Scottish theme was carried through to one of the most prestigious awards of the year, the Lifetime Achievement Award, presented to six-time Olympic gold medal winner Sir Chris Hoy.

Team of the Year: England women’s rugby team, who won the World Cup for the first time since 1994 after three final defeats.

Overseas Sports Personality of the Year: Cristiano Ronaldo, who was named world footballer of the year 11 months ago and scored as Real Madrid won the Champions League in May.

Helen Rollason Award (given for outstanding achievement in the face of adversity): The Invictus Games competitors, who took part in the international event for injured, wounded and sick servicemen and women.

But the last word went to the Hamilton, who is now Formula 1’s most successful British driver with 33 victories.

“I could not have done this without my amazing team, my family, my dad who once had four jobs to help me, my brother—I’ve been incredibly inspired by them.

“And thank you to all the fans. I always say we win and lose together because I feel your love. I hope I will continue to make you proud.”

Coach Steve Hansen commits to New Zealand through to 2017