Photo: Arsenal duo Lukas Podolski and Per Mertesacker gear up for Gala

Lukas Podolski and Per Mertesacker board flight to Istanbul 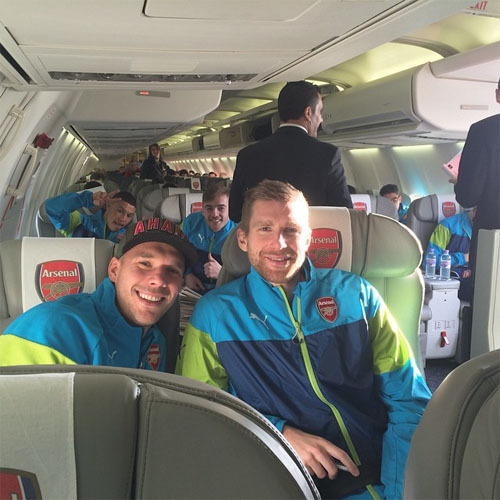 Lukas Podolski and Per Mertesacker posed for a photo as the Arsenal squad prepared for their flight to Istanbul on Monday afternoon.

The Gunners duo were all smiles despite the north London side’s humiliating 3-2 loss to Stoke City at The Britannia on Saturday.

Mertesacker, in particular, was on the receiving end of criticism after Arsenal conceded three goals in the opening 45 minutes.

But the German centre-half and his compatriot looked in good mood as Arsene Wenger’s squad set out for Turkey ahead of their clash against Galatasaray.

Podolski has scored one goal in four substitute appearances in the Champions League this season.

Arsenal cemented their place in the Champions League last 16 courtesy of a 2-0 victory over Borussia Dortmund last month.

Photos: Olivier Giroud in action as Arsenal gear up for Galatasaray clash