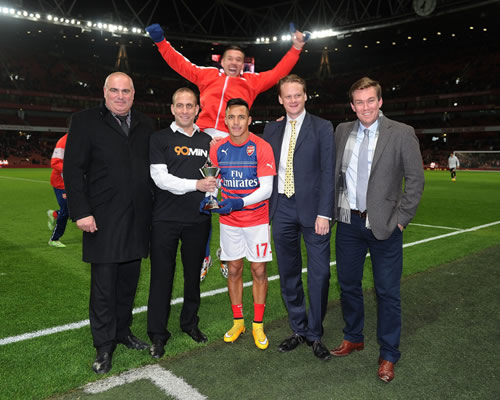 The in-form Chilean was voted as the top player in the Premier League for October after scoring three goals and making one assist for Arsenal.

The 25-year-old was presented with his trophy before his side’s 1-0 victory over Southampton at Emirates Stadium on Wednesday – and Gunners forward Podolski couldn’t resist jumping into the frame.

Sanchez has been in sublime form since joining the Gunners from Barcelona over the summer, scoring nine goals and making two assists in 13 Premier League games.

He has also netted three times in the Champions League for Arsene Wenger’s men this season.

The PFA fan player of the month awards, powered by 90min.com, are designed to give a strong voice to the supporters who are the lifeblood of the game. The awards are endorsed by the players and supported by the clubs.

You can vote for the December fans’ player of the month here.