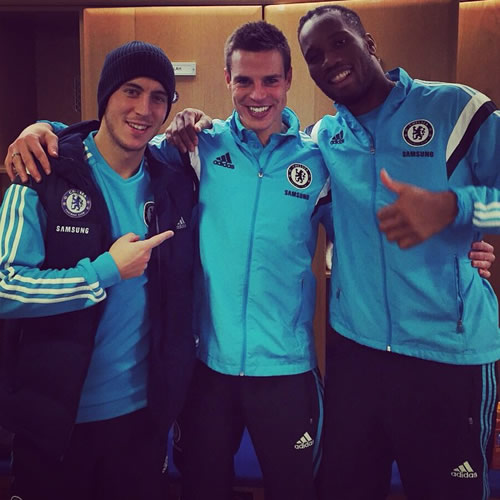 Cesar Azpilicueta, Eden Hazard and Didier Drogba were all smiles as they posed for a picture in the Chelsea dressing room after Wednesday night’s 3-0 win over Tottenham Hotspur.

Goals from Hazard, Drogba and substitute Loic Remy handed Jose Mourinho’s men a comfortable win at Stamford Bridge as they kept their place at the top of the Premier League table.

Azpilicueta posted the picture above on his Instagram account and wrote: “Another win at Stamford Bridge! Thanks to your support! #KTBFFH @chelseafc.”

The Blues remain six points clear at the top of the table, ahead of Manchester City, Southampton and Manchester United.

Mourinho’s men are yet to lose a game in all competitions this season and reached the last 16 of the Champions League as group winners.

Azpilicueta, 25, has made two assists in 12 Premier League appearances for Chelsea so far this season.