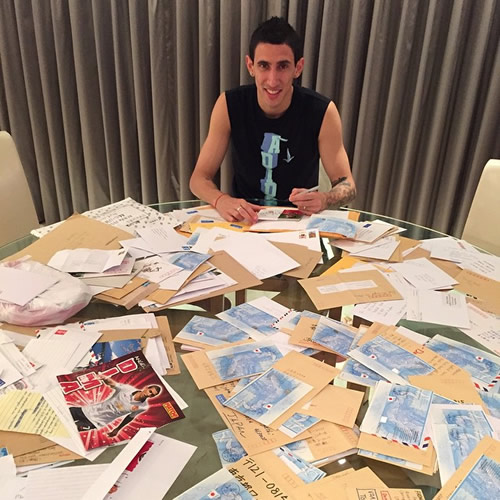 Angel di Maria has been responding to a mountain of fan mail as the Manchester United star continues his recovery from a hamstring injury.

The Argentina international is set to miss United’s clash with Stoke City at Old Trafford on Tuesday night after being substituted early on during the weekend’s win over Hull with a suspected muscular problem.

However, the 26-year-old has been keeping busy by taking the time out to respond to some of his adoring fans.

Di Maria’s wife, Jorgelina Cardoso, posted the picture above on her Instagram account and wrote: “Responding to his fans! Thank you very much for your support!”

Di Maria has scored three goals and made three assists in the Premier League since his club-record transfer to Old Trafford from Real Madrid in the summer.

Speaking last week, Di Maria insisted that he was pleased with the start he has made to life at the club.

He said: “There were one or two games when I wasn’t playing at the same level as I had at the start, but well, I guess that’s pretty normal when I’m getting used to things, isn’t it?

“The truth is that I’m pleased to be here in Manchester. Being here is something really important for me, so from that side of things I’m really pleased. The rest will come.”