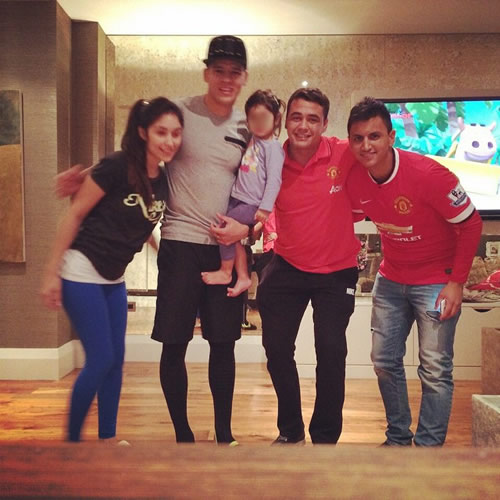 Marcos Rojo was all smiles with his family at home after helping Manchester United beat Stoke City 2-1 at Old Trafford on Tuesday night.

Louis van Gaal’s side took the lead when Marouane Fellaini headed home Ander Herrera’s cross at the far post, but the Potters drew level in the 39th minute thanks to Steven N’Zonzi’s low shot.

However, Juan Mata’s free-kick sneaked into the net in the 59th minute to earn Van Gaal’s side their fourth straight victory.

And Rojo posted the picture above on his Instagram account on Tuesday night, along with the message: “Photo with the entire family after another win, more than happy !!! @eugelusardo @germanpoggio @tatoacevedo11 and More.”

The 24-year-old Argentina international has now made nine appearances in the top flight for United since joining the club from Sporting Lisbon in the summer.

The victory kept United in fourth place in the Premier League table.

Louis van Gaal: Why I am happy with Man United’s David De Gea