Photo: Monreal and Walcott are all smiles in the Arsenal gym 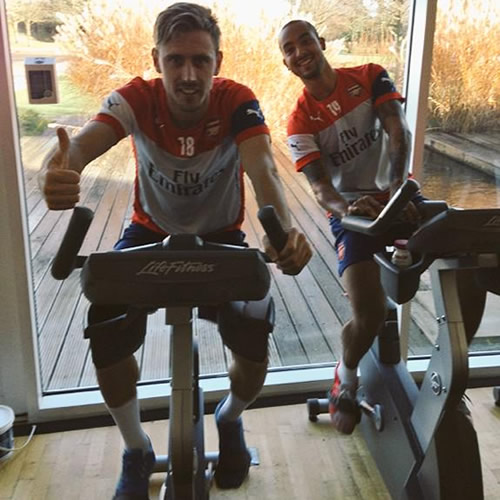 Nacho Monreal was all smiles as he posed for a picture with Theo Walcott in the Arsenal gym on Friday.

The Spanish defender is currently sidelined with a knee problem, while Walcott is recovering from a groin injury.

Monreal posted the picture above on his Twitter account on Friday afternoon to deliver an update about his recovery along with Walcott.

Monreal, who has not featured since the 1-0 win over Southampton, wrote: “Working hard with @theowalcott to be fit as soon as possible!”

Walcott has not featured for Arsenal since picking up a groin problem while on international duty with England last month.

Photo: Chelsea’s Cesc Fabregas gets into Christmas spirit with his girlfriend