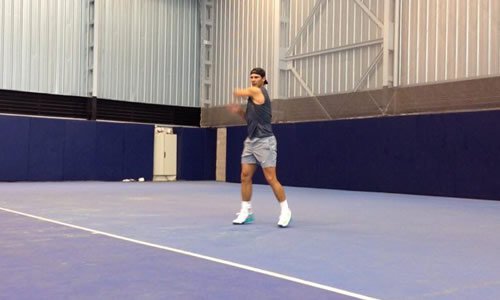 Rafael Nadal has taken to Facebook to reveal that he is back in training after having surgery to remove his appendix last month.

The 28-year-old called time on his 2014 season in October and sat out the ATP World Tour Finals after confirming that he needed an operation.

Now, the Spaniard has taken to social media to reveal his delight at being back in training ahead of the 2015 campaign.

Nadal posted the picture above on his Facebook page and wrote: “Very happy to be training again and excited to prepare the next season.”

Nadal’s return to action comes after the Spaniard received the title of ‘Favourite Son of Mallorca’ Monday.

The award “rewards Nadal for his professional and personal achievements, praising him as being the best ambassador for Majorca around the world, promoting the island as a sports destination wherever he goes”.

Spokesman in the Council, Joan Font, said: “Nadal has the sufficient sports and human merits to be appointed illustrious son and MÉS by Majorca therefore recognises it, but we have not participated in this decision.”