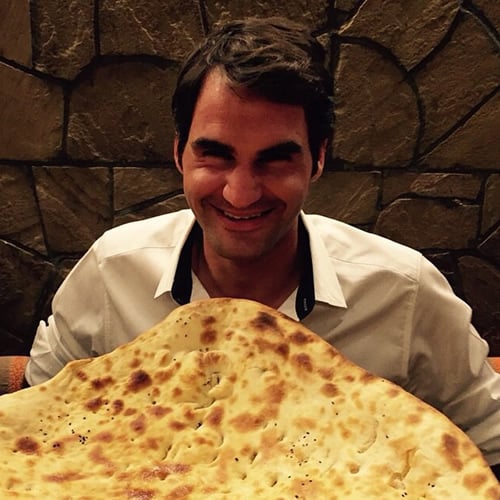 Roger Federer appears to be enjoying every minute of his tour of India.

The Swiss No1 played his first match of International Premier Tennis League (IPTL) on Sunday in New Delhi after arriving in India.

And the 17-times Grand Slam winner took to Instagram to post a picture of himself with a giant naan bread on Sunday evening.

Federer went undefeated on his debut for the Indian Aces in New Delhi as a late replacement for Rafael Nadal.

The 33-year-old joined the Indian Aces for the third leg of IPTL along with American legend Pete Sampras, with the showdown between Federer and world No1 Novak Djokovic set to take place today on Monday.

Just landed in Delhi. Look who I found on the plane #PistolPete pic.twitter.com/dWFwvVncNQ