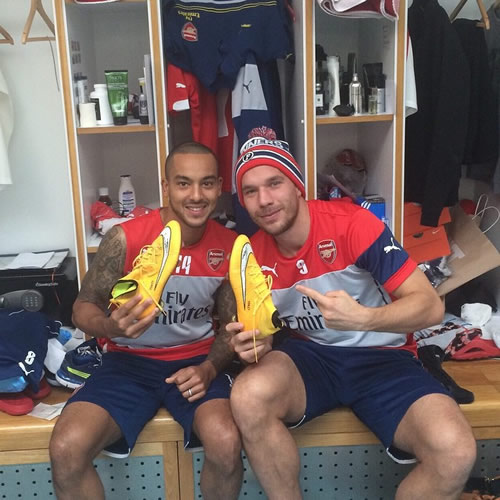 Lukas Podolski and Theo Walcott were all smiles after Arsenal training on Friday morning.

Walcott has signed a pair of his boots which are set to be put up for charity auction in aid of Podolski’s Foundation.

The England international posted the photo above on his Instagram account and wrote: “Happy to support Lukas’ Foundation with these worn and signed shoes. Now at auction: united charity.de/specials/LP2014 www.lukas-podolski-stiftung.de/en/lp2014″

Podolski impressed as he scored two goals for Arsenal in Tuesday night’s 4-1 win over Galatasaray in the Champions League.

And Arsenal boss Arsene Wenger insisted that the Germany international would get his chance to prove himself in the coming weeks.

“He’s getting back into good form and there’s a lot of competition up front,” Wenger said.

“We have injuries in midfield and at the back but up front we have all the players available so I can rotate a little bit game by game. He will get his opportunities.”

Photos: Sanchez and Flamini all smiles in Arsenal training session