Harry Redknapp has led his Queens Park Rangers squad in an attempt to recreate Slade’s classic song, ‘Merry Xmas Everybody’.

The Hoops hit the headlines for the wrong reasons earlier this week after Christmas lunch on Sunday afternoon allegedly spiralled out of control, resulting in Steven Caulker reportedly taking a trip to hospital.

However, the QPR players and staff appeared in fine, festive spirit as they came together in their best Christmas knitwear to put together a video for the club’s YouTube channel.

In particular, Hoops centre-halves Nedum Onuoha and Rio Ferdinand delivered rousing performances, whilst Charlie Austin was clearly on form after his eighth goal of the season on Saturday. 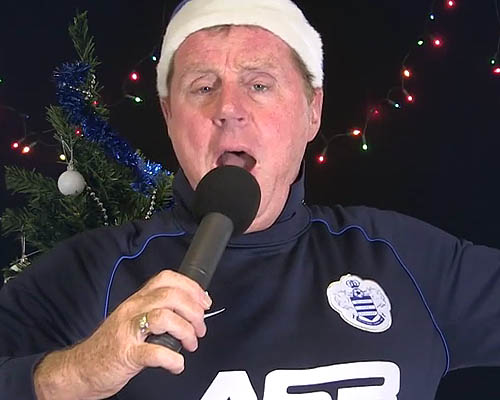 However, there is always a Grinch or a Scrooge, and perhaps unsurprisingly, Joey Barton looked passive as he mimed the words to the Christmas classic, while Clint Hill was subdued, too.

But QPR supporters who stuck out the three minutes and 15 seconds classic were rewarded with Redknapp hitting the high notes for the song’s climax, doing his best jolly Father Christmas impression.

Judging by this effort, QPR won’t be top of the Premier League or music charts this Christmas.

David Luiz: I made a good choice swapping Chelsea for PSG