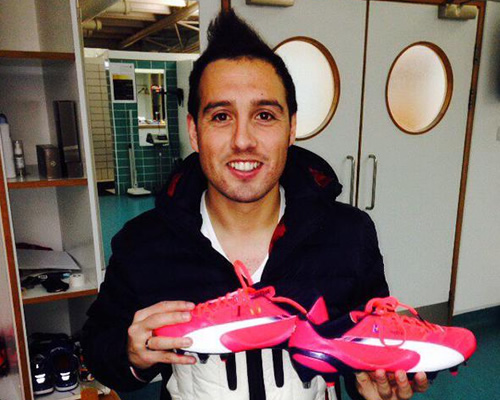 Santi Cazorla has become the latest Premier League star to take to social media to show off his new pink football boots.

On the day that the likes of Radamel Falcao and Steven Gerrard both revealed their latest footwear, the Arsenal playmaker also posted a picture of himself with his new Puma boots.

Cazorla posted the picture above on his Twitter account of himself holding up the latest addition to his footwear collection.

He shared the photo and wrote: “Thank you @pumafootball #ForeverFaster @Arsenal #evoSPEED.”

The Spaniard has been in fine form for Arsenal this season and was named the man of the match as the Gunners beat Manchester City 2-0 at Etihad Stadium on Sunday.

Cazorla scored the north London side’s opener from the penalty spot, before delivering the cross for Olivier Giroud’s second-half header.

He has scored five goals and made four assists in the Premier for Arsenal so far this season.