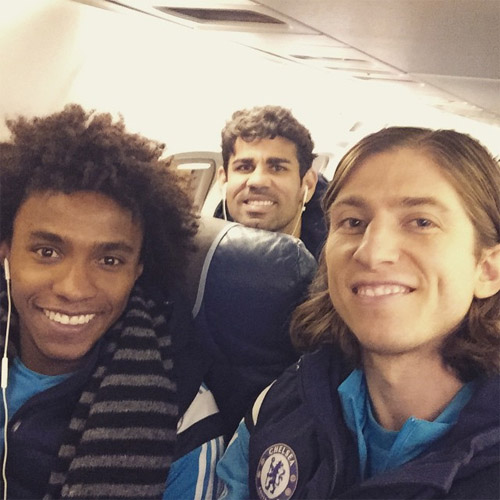 Willian was joined by Diego Costa and Filipe Luis for a selfie as Chelsea travelled to Liverpool for the Capital One Cup clash on Tuesday night.

The Blues face Brendan Rodgers’s side at Anfield in the first leg of their semi-final clash fresh from an resounding 5-0 win at Liberty Stadium on Saturday.

So it was no surprise that the Blues trio were all smiles ahead of their flight to Merseyside on Monday evening.

Willian posted the above photo on Instagram, accompanied by the following caption: “Off to Liverpool @filipeluis #diego”

The Premier League leaders took the lead inside a minute when Oscar fired in, before two goals from Costa made it 3-0.

Brazil international Oscar made it 4-0, before Chelsea substitute Andre Schurrle added rounded off the win with a fifth in the 79th minute.

The Blues are five points clear at the top of the Premier League table after Arsenal were surprise 2-0 winners against defending champions Manchester City on Sunday.