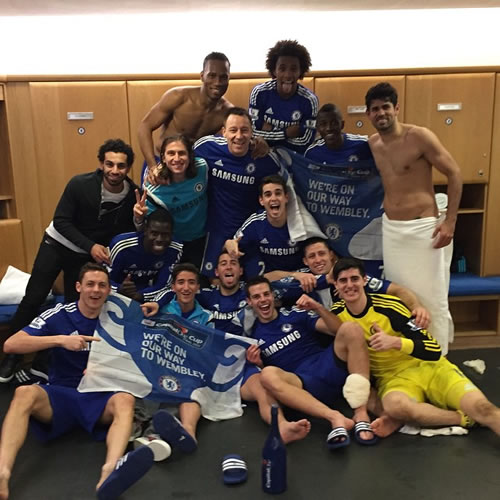 The Chelsea squad celebrated their League Cup semi-final victory over Liverpool in the Stamford Bridge dressing room after their 2-1 aggregate victory.

With the score at 1-1 from last week’s first leg at Anfield, neither side failed to break the deadlock in 90 minutes in west London.

However, Branislav Ivanovic’s header early into extra-time ended up being all that separated the two sides after an enthralling contest.

The likes of Diego Costa, Didier Drogba, John Terry, Oscar and Nemnaja Matic were all involved in the post-match celebrations after a gruelling match.

Jose Mourinho’s son was also pictured with the squad in the Stamford Bridge dressing room after the Blues reached the Wembley final on 1 March.

Captain Terry posted the picture above on his Instagram account and wrote: Great win tonight. Wembley here we come. Unbelievable effort from the boys tonight.”

Chelsea will play either Tottenham Hotspur or Sheffield United in the final in March.

The Blues’ next game is a Premier League clash with defending champions Manchester City at Stamford Bridge on Saturday.

Jose Mourinho: Why I was so impressed by Liverpool