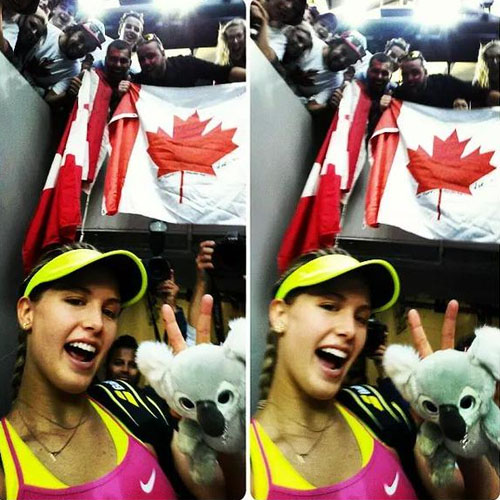 Eugenie Bouchard was astonished that a fan threw the seventh seed their phone for a “winning selfie” after the Canadian moved into Australian Open third round.

The popular 20-year-old progressed to the next phase courtesy of an emphatic 6-0, 6-3 victory over unseeded Kiki Bertens of the Netherlands on Wednesday.

Bouchard is fast becoming one of the WTA’s best-supported stars, but the Canada number one was still surprised when a member of the Genie Army threw their phone to the Wimbledon runner-up in hope of a selfie.

Of course the world number seven duly obliged for her adoring fan with two selfies, producing a charming smile with a toy koala bear under her arm and the Canadian flag hanging in the background.

Can't believe you threw me your phone “@pabs613: How about a winning selfie with @geniebouchard pic.twitter.com/BB48ESpiMA”

In a bizarre post-match interview, Bouchard was asked by a male presenter to give the stadium a twirl following her straight sets win.

The No7 seed, clearly embarrassed, obliged the interviewer, although the first Canadian to reach a Wimbledon final was still bemused in her post-match media conference.

Eugenie #Bouchard give us a twirl on #MCA. Who do you think is best dressed? #ausopen – http://t.co/op8Wco925y

“It was very unexpected,” said Bouchard. “I don’t know, an old guy asking you to twirl. It was funny.”