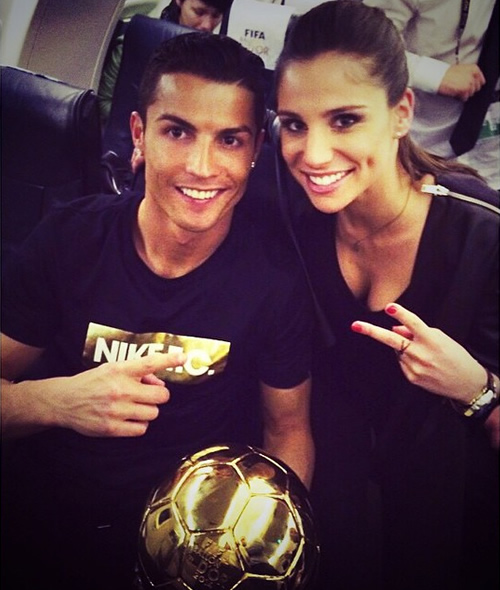 Cristiano Ronaldo appears to have wasted little time moving on after his break-up with long-term girlfriend Irina Shayk.

Reports in the British media this week have claimed that the three-time Ballon d’Or winner has started dating Spanish television presenter Lucia Villalon.

The Portugal captain confirmed his break-up with Victoria’s Secret model Shayk this week after the pair’s five-year relationship came to an end.

Speculation that the pair could be set to end their relationship gathered pace after Shayk unfollowed the Real Madrid forward on Twitter.

And the former Manchester United forwaard was pictured celebrating his Ballon d’Or triumph last week with Villanon after winning the prestigious award in Zurich.

Villanon posted the picture above of the duo on her Instagram account last week, along with the caption: “There are 3! Golden ball congratulations! Zurich 12/01/15”

An official statement from Ronaldo released this week read: “After dating for five years, my relationship with Irina Shayk has come to an end. We believed it would be best for both of us to take this step now.”

Meanwhile, a spokesperson for Shayk said on Saturday: “We can confirm Irina Shayk has ended her relationship to Cristiano Ronaldo of five years.”

Villanon is a 26-year-old sports journalist who graduated with law and journalism degrees.

Kieran Gibbs: What Arsenal’s Alexis Sanchez is like off the pitch