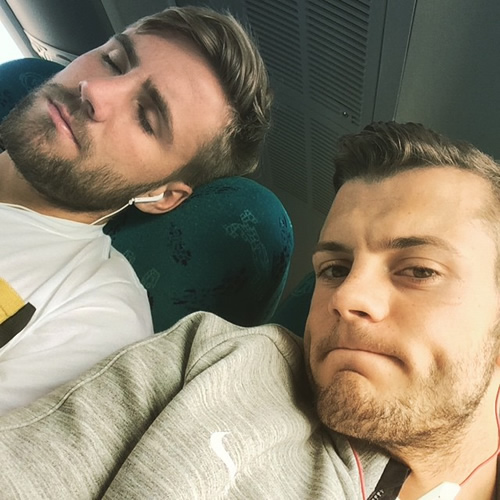 Jack Wilshere has taken to social media to post a picture of himself alongside a sleepy Luke Shaw during last summer’s World Cup in Brazil.

The pair were both on England duty as Roy Hodgson’s men endured a disappointing tournament and failed to navigate their way out of the group stage.

He shared the snap of him and the Manchester United defender and wrote: “#TBT to the World Cup and me catching @lukeshaw23 slipping!!”

Wilshere is currently sidelined as he continues his recover from ankle surgery.

The 23-year-old midfielder was ruled out for around three months and Arsenal boss Arsene Wenger recently confirmed that he could make his comeback in late February or early March.

Before his injury setback, Wilshere had scored one goal and made one assist in nine Premier League games for the north London club.

Arsenal travel to Brighton and Hove Albion in the fourth round of the FA Cup on Sunday afternoon.