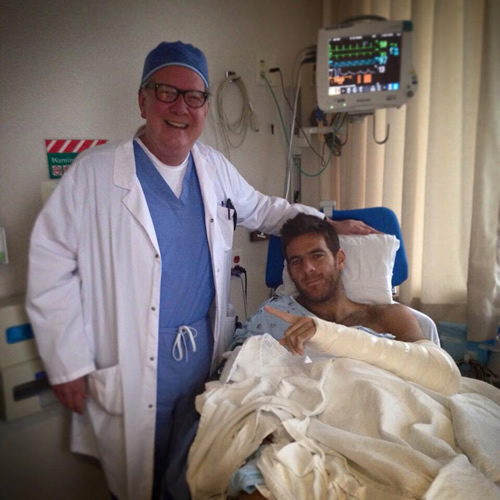 Juan Martin del Potro has undergone surgery on his left wrist for a second time in less than a year after his withdrawal from the Australian Open.

The Argentine returned to action this month after missing most of last season with a wrist problem but pulled out of the first Grand Slam of the year before it got under way.

The 26-year-old took to his Facebook page to share a picture of himself after the successful surgery and vowed to return to full fitness as soon as possible.

The 2009 US Open champion Del Potro shared the photo above and wrote: “A few hours ago I was in Australia, today at the Mayo Clinic.

“As recommended by my doctor, I underwent a minor surgery to fix the problem that caused me pain in the wrist.

“I feel more determined than ever to return to the courts sooner than later, to play tennis without feeling pain and to enjoy the love that you give me.

“I will begin rehabilitation in two weeks. Thanks!!”

Australian Open 2015: Serena Williams sails through to round three