Where is your trophy, Jamie? 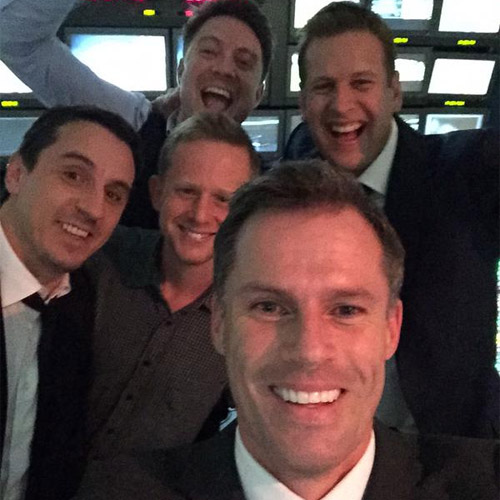 The Liverpool legend was heavily critical of Arsenal for their post-match selfies during his popular Sky Sports show with former Manchester United defender Gary Neville.

In particular, Carragher was left annoyed after Aaron Ramsey and Alexis Sanchez posted selfies to their Instagram accounts following a 2-0 win at Manchester City.

The former Reds centre-half claimed that the impromptu team photos should only be allowed when the club has won a trophy, providing a memento to stick on the mantlepiece.

Perhaps a tad envious, Carragher decided it was time the Monday Night Football team got involved in the social media craze, ushering Neville, host Ed Chamberlain and more staff into his snap.

This is for the MNF fans – we couldn't have done it without you. One for the mantle piece!! pic.twitter.com/ge8U9E4dCK

Now that wasn’t too bad, was it Jamie?

Carragher did praise Arsenal manager Arsene Wenger for finally changing his approach to games against their biggest Premier League rivals.

Suso explains why he swapped Liverpool for AC Milan