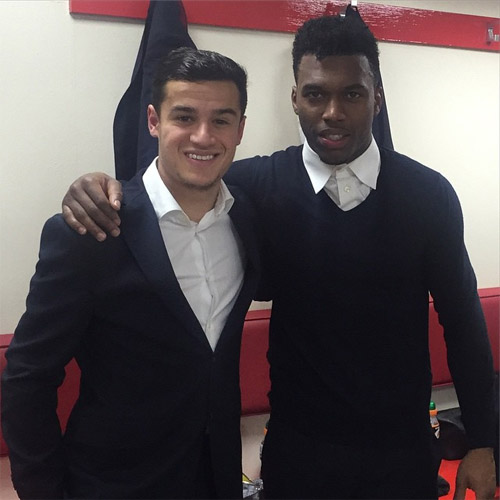 Philippe Coutinho declared that he was thrilled to have Daniel Sturridge back after the Liverpool striker scored on his return from injury.

The 25-year-old, who has been sidelined since early September, scored 13 minutes after his introduction in the second half of Liverpool’s 2-0 win against West Ham United at Anfield.

Brazil international Coutinho teed up Sturridge for his second Premier League goal of the season, and the pair posed for a dressing room photo following the striker’s successful return from a thigh injury.

Coutinho posted the above photo and wrote the following caption on Instagram: “glad to see you back @dstudge. He is back”

Coutinho, who has been one of Liverpool’s standout performers over the past month, created the opener on Merseyside after his lobbed pass was collected by Raheem Sterling, who finished past West Ham goalkeeper Adrian.

The 23-year-old playmaker made Sturridge’s strike, making four assists in the top-flight this campaign, as well as scoring two Premier League goals of his own.

Liverpool move up to seventh place in the table ahead of their FA Cup fourth-round replay at Bolton Wanderers on Wednesday night.