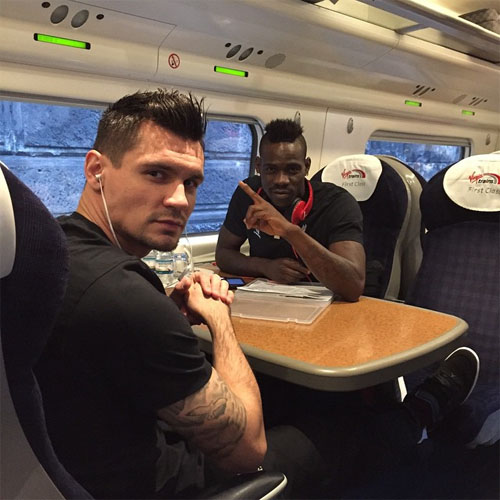 Dejan Lovren and Mario Balotelli need to find ways of keeping themselves occupied as the Liverpool pair continue to be out-of-favour under Brendan Rodgers.

So what better way then snapping a photo en route to London ahead of the second leg of their Capital One Cup semi-final at Stamford Bridge on Tuesday night.

Lovren posted the above photo to Instagram, including Balotelli’s handle in his caption.

Liverpool manager Brendan Rodgers insisted that the Italy international still has a future at Anfield even though the 24-year-old striker hasn’t started a Premier League game since early November.

The former Manchester City man has been linked with a return to Serie A in recent weeks amid reported interest from Napoli and Sampdoria.

Balotelli has failed to score in the Premier League following his £16m switch to the five-time European champions from AC Milan in the summer.

The former Inter Milan star’s only Liverpool goals came against Ludogorets and Middlesbrough.

Cesc Fabregas: I had disagreements with Chelsea boss Jose Mourinho