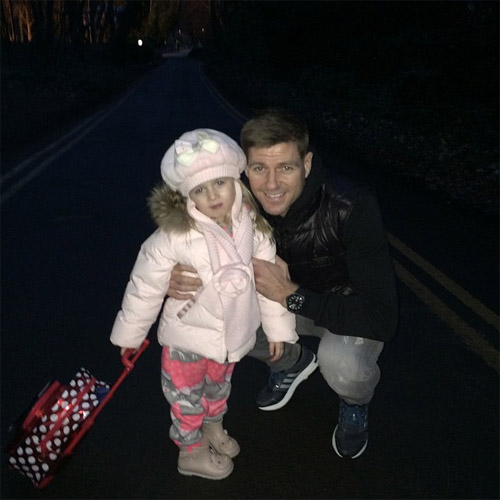 Steven Gerrard spent some quality time with his daughter ahead of the visit of Chelsea on Tuesday.

The Reds captain could return to face the Blues in the first leg of their Capital One Cup semi-final clash at Anfield.

Gerrard is set to leave his boyhood club at the end of the season after he agreed a deal to join MLS outfit LA Galaxy.

And Liverpool legend won’t miss the cold English evenings in Miami, posting a photo with his youngest daughter Lourdes.

“Little stroll,” wrote Gerrard, before the doting father added in a caption for a second snap, “My world.”

The 34-year-old midfielder missed his side’s 2-0 victory over Aston Villa due to a hamstring problem.

Gerrard, who has three daughter – Lily-Ella, Lexie and Lourdes, was forced off at half-time of their 1-0 win at Sunderland earlier this month due to a hamstring injury.

The Liverpool talisman has scored five goals and has created one goal in 20 Premier League appearances this season.