Photo: Liverpool’s Steven Gerrard puts his feet up in front of Spanish footie 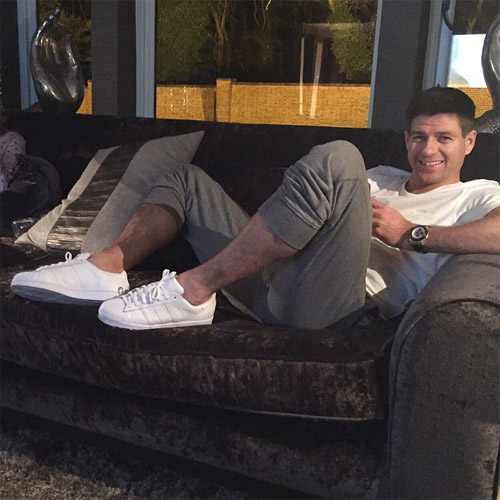 Steven Gerrard deserves a well-earned rest after the Liverpool captain completed the full 120 minutes at Stamford Bridge on Tuesday night.

The Reds captain was unable to help his boyhood club reach the League Cup final after a 1-0 defeat by Chelsea in extra-time at Stamford Bridge.

The 34-year-old could be in action as soon as Saturday, though, as Liverpool welcome Sam Allardyce’s West Ham United side to Anfield.

And Gerrard was content to chill on his couch and watch Spanish football on Thursday night ahead of this weekend’s fixture.

Gerrard posted the above photo and wrote: “Got my feet up watching the Spanish football! #superstar #adidasoriginals”

The former England captain announced that he will leave Liverpool in the summer after the veteran star agreed a move to MLS outfit LA Galaxy.

Liverpool’s semi-final exit from Capital One Cup means Gerrard’s only hope of some final silverware rest with the FA Cup, with the final taking place on his 35th birthday in May.