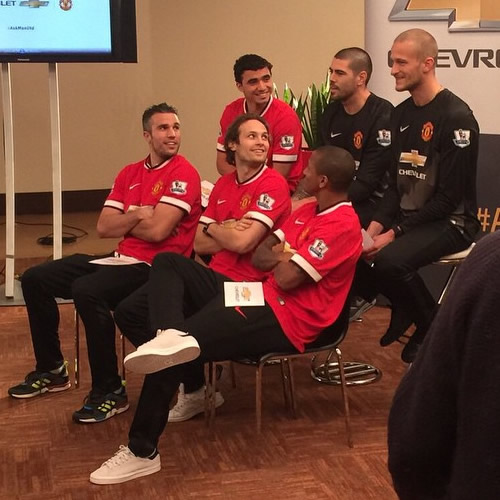 Rafael Da Silva was all smiles as he posed alongside the likes of Daley Blind and Robin van Persie in a Manchester United promotional photoshoot.

The Brazilian was joined by Dutch duo Blind and Van Persie, as well as Ashley Young, Victor Valdes and Anders Lindegaard as they lined up for club sponsor Chevrolet.

United are currently gearing up for their FA Cup fourth-round clash with Cambridge United on Friday night.

Louis van Gaal’s side secured a 2-0 victory at Queens Park Rangers last weekend thanks to second-half goals from Marouane Fellaini and James Wilson.

The 24-year-old Brazilian full-back has made one assist in nine games for the Red Devils so far this season.

Summer signing Blind also took to Instagram to share a picture from the day, with the Netherlands international lining up alongside Rafael, Van Perise, Young and Lindegaard.