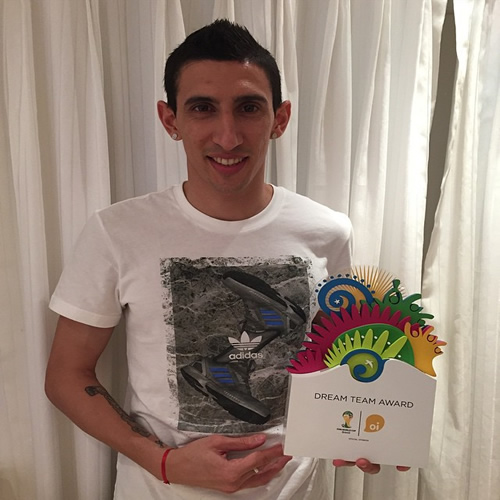 Angel di Maria was all smiles as he posed for a picture with Oi Dream Team Award following his displays for Argentina in last summer’s World Cup in Brazil.

The Manchester United attacker was named in the 11 voted for by fans as being the team of the tournament.

Di Maria was joined by the likes of Lionel Messi, Manuel Neuer and James Rodriguez in the side, who would be coached by Germany boss Joachim Low.

And the 26-year-old posed for a picture on his wife’s Instagram account. She uploaded the photo above and wrote: “The OI DREAM TEAM AWARD – recognition for his performances as one of the best and most notorious players of the Fifa World Cup Brazil 2014. Congratulations my love!”

Di Maria has scored three goals and made six assists in 14 Premier League games so far this season.

He could feature when United take on Cambridge United in the fourth round of the FA Cup on Friday evening.