Marcos Rojo appears to be embracing the British weather 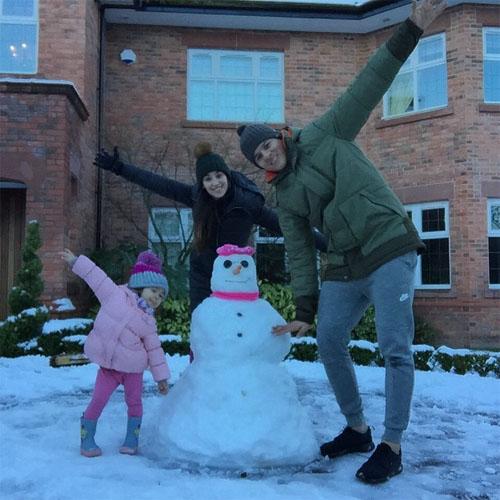 Marcos Rojo may hail from warmer climes, but the Manchester United defender is embracing the freezing British weather.

The Argentina international made the most of the snowy conditions in the northern England as he spent some quality time with his wife and daughter on Thursday afternoon.

The Rojo trio build an impressive snowman, or should we say, snowwoman, in their garden, with the centre-half taking to Instagram to show of his expert sculpting skills.

Rojo posted the above photo and wrote on the social media site: “our snowman”

Earlier, the 24-year-old defender posted a photo of his snow-covered drive as he prepared to leave his house, presumably for training at United’s Carrington facility.

Rojo posted the following caption: “Tearing up the morning”

The Argentina international has made 12 appearances in all competitions for the Red Devils this season.

Photo: Man United’s Michael Carrick could be late for training