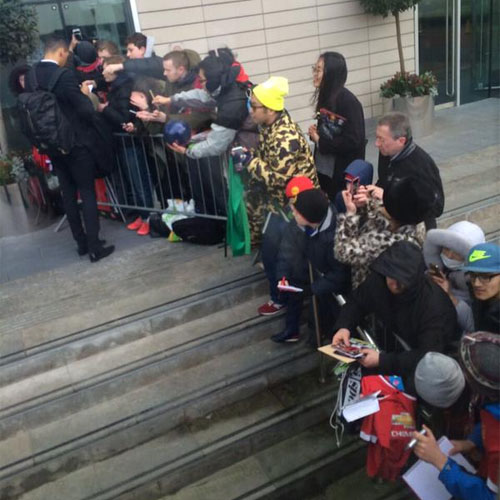 Marouane Fellaini has issued a rallying cry ahead of Manchester United’s clash against Leicester City at Old Trafford.

The Red Devils are looking to exact revenge on the Foxes after a shock 5-3 defeat by Nigel Pearson’s side at King Power Stadium earlier this season.

The Belgium international was named among the substitutes for the Premier League game as Louis van Gaal named a very attacking line-up for Saturday’s game.

United midfielder Fellaini posted a photo of United supporters queueing up to see their heroes outside Old Trafford ahead of kick-off.

It s time to go for the next game this afternoon … come on guys ! #mufc pic.twitter.com/LKtzFWOFet

The 27-year-old has scored three goals in 14 appearances in all competitions for United this season, breathing life into his ailing United career.

The giant Belgian was heavily criticised after a disappointing first season at the 20-time English champions following his £27.5m move from Everton to United in 2013.

United can move four points clear of fifth-placed Arsenal with victory over Leicester.

Photo: Jack Wilshere all smiles with Arsenal legend at Colney