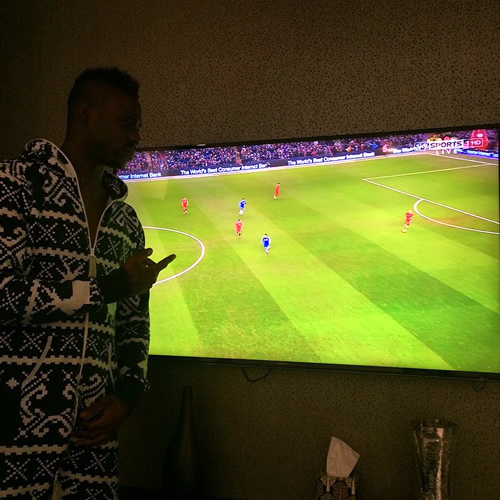 As the snow fell around Anfield during Liverpool’s League Cup clash with Chelsea, Mario Balotelli was clearly determined to keep warm.

The Italian striker sat out the first leg of the semi-final tie on Merseyside due to illness after also missing the weekend’s 2-0 win over Aston Villa in the Premier League.

However, the forward was determined not to miss the chance to cheer on his team-mates from home and looked cosy as he posed for a picture in front of his television during the first half of Tuesday’s game.

He posted the photo above on his Instagram account and wrote: “This illness might prevent me from helping my team on the pitch but it will NOT stop me from supporting my team off the pitch!! come on guys.. COME ON LIVERPOOL.. YNWA.”

Balotelli has endured a mixed start to his Anfield career since his £16m transfer from AC Milan last summer.

He has managed just two goals in all competitions for Brendan Rodgers’ men, despite making 18 appearances for the Merseyside outfit.

The forward has started just eight Premier League games so far this term.