Steven Gerrard gears up for his 700th Liverpool appearance 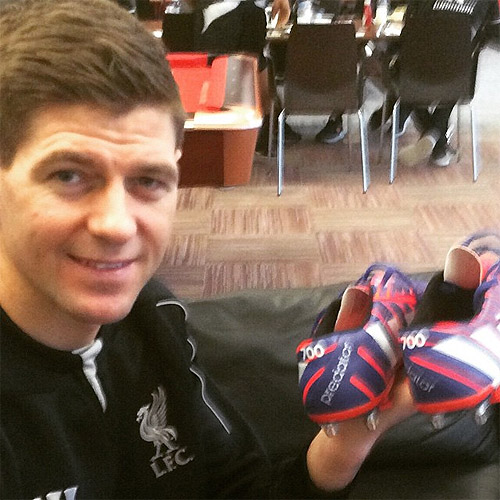 Steven Gerrard has taken to Instagram to show off his new Adidas boots made ahead of the midfielder’s 700th Liverpool appearance.

The Reds skipper will play his 700th game as a Liverpool player if Brendan Rodgers selects the 34-year-old to face West Ham United on Saturday.

Gerrard announced that he will leave his boyhood club at the end of the season after the midfielder agreed a move to MLS outfit LA Galaxy.

And the former England skipper couldn’t hide his delight at this special edition boots in honour of the talismanic midfielder’s Liverpool milestone.

Gerrard posted the above photo to his Instagram page and wrote the following caption: “I will be wearing these in the next match I play in. Appearance number 700 for the Reds! #therewillbehaters #predatorinstinct #adidasuk”

The Reds captain has scored five goals and has made one assist in 20 Premier League appearances this season.