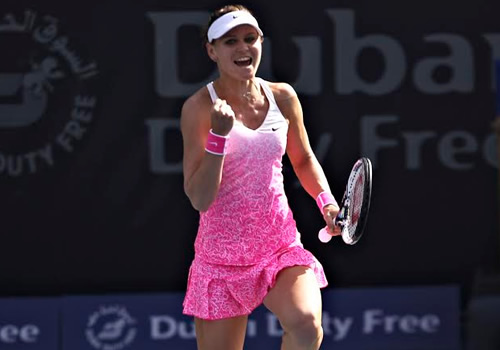 Defending champion Venus Williams was beaten 6-4 6-2 by Lucie Safarova in the third round of the Dubai Duty Free Tennis Championships on Wednesday.

It was her first defeat here since 2005 and ended her winning streak in Dubai at 16 matches, still a record for any player in the WTA event.

“I think she played awesome,” said Venus of Safarova. “There were a couple of games there that I didn’t even get my racquet on the ball. What can I say to that? I don’t think I played badly, but I couldn’t afford to make any errors today. The errors that I made were really costly, so, you know, credit to her. I wish her the best of luck the rest of the tournament.”

Radwanska was upset 6-4 6-2 by fast-rising Spanish star Garbine Muguruza after arriving in Dubai struggling with her health, following a spell playing Fed Cup in the chill of her Polish homeland. Playing for the second straight day in the midday sun left her unable to fully rise to the occasion.

“I think when you’re not playing your best tennis then it’s hard to compete with those kind of players,” said Radwanska. “I think I didn’t serve enough, you know, to win that. I think that was really important part in that match.”

Kvitova was defeated 6-3 4-6 6-3 by Carla Suarez Navarro, and agreed that there is little to separate the players.

“Yeah, everybody can beat everyone in the top,” she said. “And, yeah, maybe it’s nice for the fans that they can see something new and some surprises, but not every time it’s nice for us.”