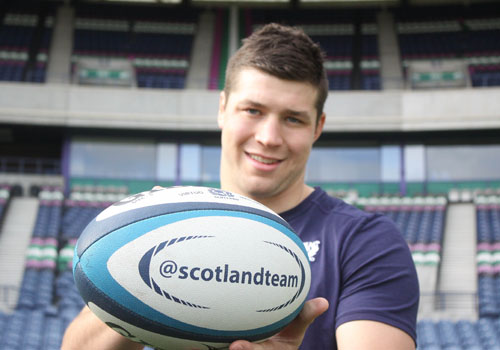 The 24-year-old Gunners lock has been out of action with a broken arm since their European Challenge Cup win over Lyon in October, which saw five players struck down with serious injuries.

He’s virtually not played for us this season, as has Cornell [du Preez], so we’ve had two absolutely major players playing very little rugby this year.

While Edinburgh’s squad is currently being hit more by international call-ups than injuries, Gilchrist was told by upper limb specialist Mr Doug Campbell at Spire Hospital Leeds that he requires revision surgery.

Edinburgh’s medical team have now ruled out a return to action this season for their vice-captain with his targeted return being a place in Vern Cotter’s Scotland training camp for the Rugby World Cup.

And Gunners head coach Alan Solomons admits it is a big blow to lose Gilchrist for the rest of the season.

“It’s a big blow. It’s a blow to Edinburgh and to Grant himself,” Solomons said ahead of Edinburgh’s Guinness PRO12 clash at Cardiff Blues on Sunday.

“He’s a terrific player and plays a huge role at Edinburgh in terms of his leadership, running the lineouts. He’s been a massive, massive loss to us.

“He’s virtually not played for us this season, as has Cornell [du Preez], so we’ve had two absolutely major players playing very little rugby this year.

“These things happen in rugby and I know Grant will be well looked after. We’ve got very strong medical staff here.”

The news will also come as a blow to Scotland head coach Vern Cotter, who had named Gilchrist as captain of the national side just days before the injury.

I have no doubt that Gilco will return and be raring to go come next season, and I’m sure he’ll play an important part in Scotland’s World Cup campaign.

Gilchrist missed Scotland’s superb autumn series as they impressed with wins over Argentina and Tonga either side of pushing the All Blacks all the way in a narrow defeat, and was unable to take his place in the RBS 6 Nations squad.

But Solomons insists that, after some rest and recuperation time, Gilchrist will be back in training with a view to joining up with the Scotland’s training squad for their Rugby World Cup warm-up matches against Italy, Ireland and France in August.

“Gilco knows he’s getting ready for next year,” Solomons added.

“I’ve got total confidence in our medical staff; they’re outstanding. Everybody seems confident and when they’re confident I’m confident.

“I have no doubt that Gilco will return and be raring to go come next season, and I’m sure he’ll play an important part in Scotland’s World Cup campaign.

“He’s going to have a wee rest once he’s cleared by the medical staff.

“I’d like to give him that break now because then he wants to tuck into his training and get back up to speed because he’s had plenty of breaks, so we’ve got to manage that process well so when it comes to the World Cup he’s absolutely on song.”

Solomons also ruled out the possibility of Gilchrist going on loan to a southern hemisphere club to get some game time when he returns with the focus being on a return to the national team.

“I think that maybe difficult,” he said. “Because of the nature of Gilco’s injury, he’ll be good to go by the time Scotland start their pre-match prep.

“I think he’ll be able to get that match practice with Scotland in the games that have been arranged.

“Because the World Cup is taking place when it’s taking place, Scotland – like a lot of the northern hemisphere sides – have arranged Test matches in their camp around that and it will slot in with the timing of Gilco’s return.”