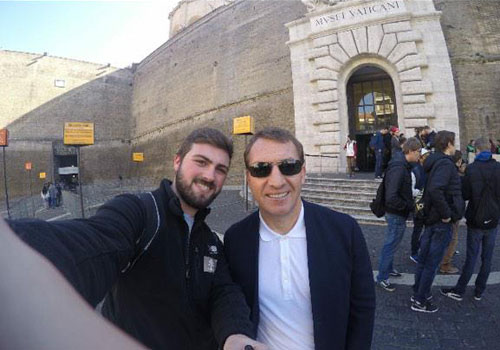 Brendan Rodgers has fuelled reports Liverpool could sign Roma star Miralem Pjanic after the Reds manager posed for a selfie with a fan in the Italian capital.

The Reds manager, who spent over £100m on new signings last summer, was unable to take his post-match media conference following a 3-2 victory over Tottenham Hotspur on Tuesday night.

Liverpool number two Colin Pascoe revealed Rodgers had to catch a flight, and the Reds boss was still absent as his assistant previewed their FA Cup fifth-round clash against Crystal Palace at Melwood on Thursday.

And it appears Rodgers’ destination of choice was Rome after he stopped to pose for the above selfie with supporter Ryan Parkinson (@Ryan_Parkinson) in Rome on Thursday.

While Rodgers is a romantic when it comes to his football philosophy, the Liverpool manager presumably travelled to Italy for business and not pleasure.

The Reds have been heavily linked with a move for Roma midfielder Milan Pjanic in recent weeks as Rodgers prepares for life without Steven Gerrard.

The Bosnia-Hezegovina international has scored three goals and has made five assists in 21 Serie A appearances this season.