The Sport Review was treated to dinner at Cafe Football last week, here is our match report

Gary Neville has been adding spice to Sky Sports‘ football coverage for over two years – and now the former Manchester United defender is adding flavour to our plates.

The retired England international has seamlessly transferred his professionalism on the pitch to our television screens, so when The Sport Review went along to Cafe Football, backed by Neville and Ryan Giggs, our expectations were understandably high.

If the prospect of a top-six clash between Liverpool and Tottenham wasn’t enough to get us salivating, the thought of some top-class cuisine had left us chomping at the bit.

Based in Westfield Stratford in east London, Cafe Football splits its menu up into three sections: the warm-up, the kick-off and naturally extra-time, aka dessert.

The staff are accommodating, and our waiter, Gurjas, masterminded the perfect strategy as we got stuck into our warm-up: Pizzetta and Chorizo, before allowing some time to digest an entertaining start at Anfield. 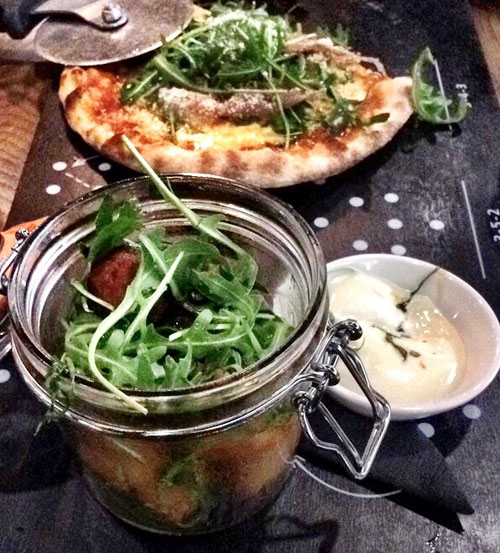 As the action hotted up on the pitch, we had some tactical decisions to make. Would we call on the legendary Chelsea manager or an iconic Blues striker to get us through to half-time?

For those who like their meat in a bun, The Special One, The Wizard and The Beast all proved tempting options. The pizzas had a more cultured feel as the menu paid homage to a certain Sicilian, with The Goal and Zola. And La Liga enthusiasts could tuck into El Clasico.

Unsurprisingly, Cafe Football also accommodates the football purists, with the Terrace Food section of the menu offering traditional options, whilst co-owner Ryan Giggs has his say in Fans’ Favourites.

We opted for The Beast and the special Ash Le Coal burger, which contained 7oz dry aged smoked beef, cheddar cheese, fig and onion relish, and Coal burger sauce in a brioche bun. 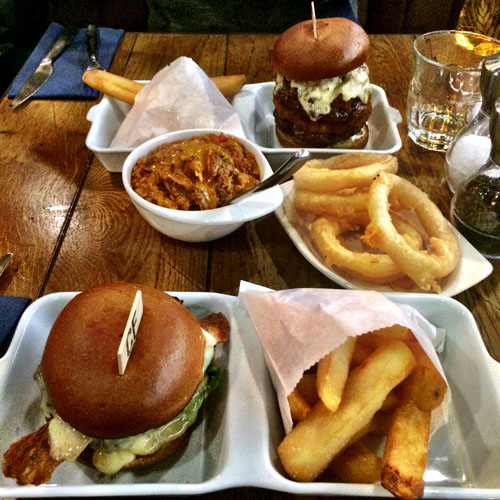 The Ash Le Coal and Beast burgersPhoto: The Sport Review

A football-themed restaurant obviously requires half-time oranges before a glance down the dessert list. You can choose from an array of sweet options or put the Sweet Counter on trial to check out the ice cream flavours and Pic n’ Mix sweets available.

The beauty of Cafe Football is that you have 90 minutes (plus stoppage time) to enjoy your food without being harried, and whilst the atmosphere was electric, it wasn’t boisterous as what you would find in your local boozer, making it ideal entertainment for the younger members of the football fraternity.

It was, as Andy Gray would say, top-drawer grub in a friendly and fun environment – and for this Liverpool-supporting reviewer, Giggs and Neville were even kind enough to sort out a Reds victory on the night.

Cafe Football Manchester, based inside Hotel Football, opens on 2 March