Man United’s Marcos Rojo: Why I took my family on Old Trafford tour 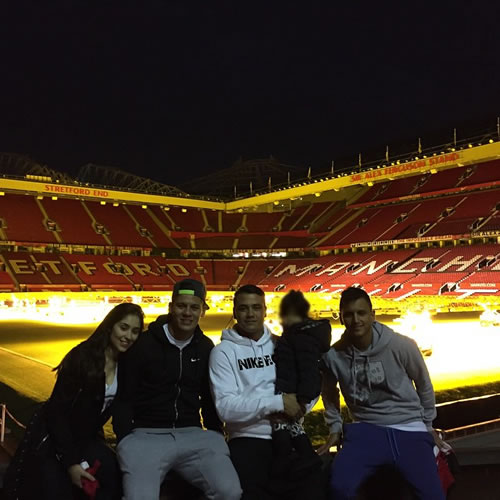 Marcos Rojo has revealed that he opted to take his family on a tour of Old Trafford to better understand the history of Manchester United.

The Argentina international has been settling into life at the Premier League club following his transfer from Sporting Lisbon last summer.

Rojo opted to take his family on a walk around Old Trafford back in November during his spell on the sidelines with a shoulder injury.

He was pictured with his girlfriend Eugenia Lusardo and some friends in the Theatre of Dreams.

And the 24-year-old has explained why he chose to visit his new club’s stadium out of hours.

Rojo wrote on Manchester United’s Instagram account on Thursday: “When I was young, I always used to watch matches with my family and friends.

“Old Trafford is a stadium which is very important in the history of the game and to get the chance to have a look around and get to know it was really very good and something to remember.”

Rojo will be expecting to feature when Manchester United travel to Swansea City in the Premier League on Saturday afternoon.

The Red Devils, who will face Arsenal in the FA Cup quarter-finals next month, are currently in third place in the Premier League table and 12 points behind leaders Chelsea.

Three reasons why Liverpool should take the Europa League seriously