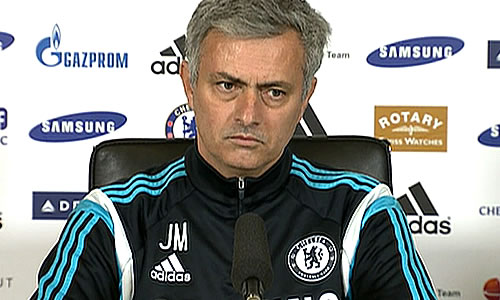 Jose Mourinho has confirmed Cesc Fabregas is available for the visit of Everton, but has ruled John Obi Mikel out of Wednesday’s clash.

Fabregas was sidelined for the stalemate with title rivals Manchester City and 2-1 win at Aston Villa on Saturday after picking up a hamstring injury during the League Cup semi-final against Liverpool last month.

However, the 27-year-old, who has scored two goals and has made 15 assists this season, is in line to feature against the Toffees at Stamford Bridge.

Asked if Fabregas was ready to return at his pre-match media conference at Chelsea’s training ground on Tuesday, Mourinho replied: “Yes.”

Pressed about the midfielder’s potential impact upon his return: “I want to have every player. But the team played well without him and we coped with the situation.

“Obviously to have him back is important.”

MORE: Can you guess these Chelsea players?

However, Mourinho will be without defensive midfielder Mikel after the Blues boss revealed that the Nigerian has a slight knee problem.

Mourinho added ahead of the visit of Everton: “Injured, we have only Mikel. With a little problem in his knee. He is the only one who is not in conditions [to play].”

Brazil international Filipe Luis was another absentee for the victory over Paul Lambert’s struggling side, but Mourinho confirmed there are no other injury problems.

“After that we have a couple of little things that we have to control tomorrow, but normally, not any problems,” he added.

Chelsea’s Jose Mourinho: Seven-point lead is nothing in title race