David Ospina has been welcoming Juan Cuadrado to London... 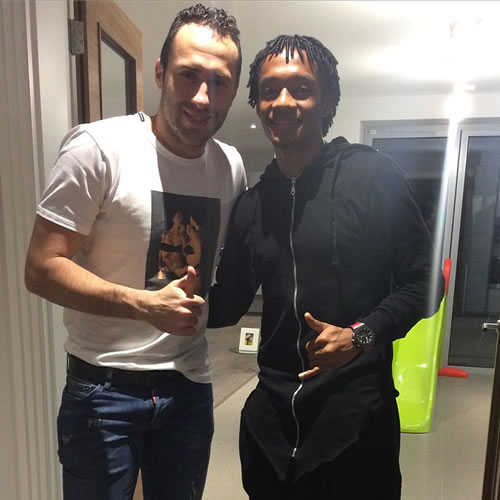 David Ospina and Juan Cuadrado were all smiles as they posed for a picture following the winger’s transfer to Chelsea from Fiorentina this week.

The Colombia duo, who both played for their national side at last summer’s World Cup in Brazil, linked up on Wednesday night after Cuadrado signed for the Blues on transfer deadline day.

The pair have both since sealed moves to the Premier League, with goalkeeper Ospina joining Arsenal from Nice last July.

And both players looked to be in good spirits together on Wednesday night.

Ospina, 26, has made four appearances for Arsenal in January. He has featured between the posts for Arsene Wenger’s men on six occasions and has kept four clean sheets, including during the 2-0 win at Manchester City last month.

Arsenal’s next game is a trip to local rivals Tottenham Hotspur in the Premier League.