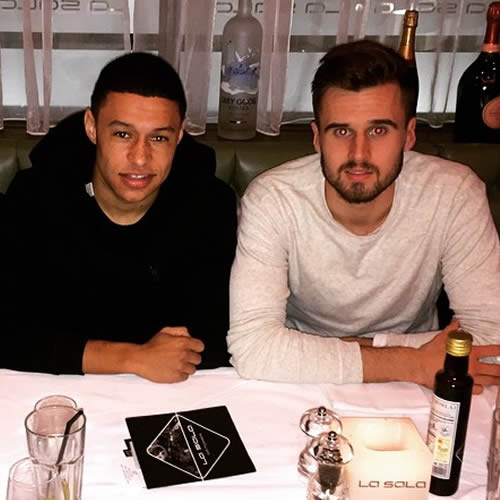 Alex Oxlade-Chamberlain was reunited with Carl Jenkinson on Monday night as the Arsenal duo enjoyed dinner together.

Jenkinson is halfway through his season-long loan at West Ham United after been deemed surplus to requirements at Emirates Stadium this term by Arsene Wenger.

But it is clear that he is still close to his Arsenal team-mates as he joined Oxlade-Chamberlain for a meal at La Sala.

Oxlade-Chamberlain, who along with Jenkinson clearly had no interest in transfer deadline day, posted the picture above on his Instagram account and wrote: “Nice dinner at @lasala_uk with the boys.”

Jenkinson has made 15 Premier League starts for Sam Allardyce’s West Ham side this season following his temporary switch to the east London club.

He has also made three appearances from the bench and has notched up two assists for his team-mates.

Oxlade-Chamberlain, 21, has scored to goals and made three assists for Arsenal so far this season and has made 21 Premier League appearances.