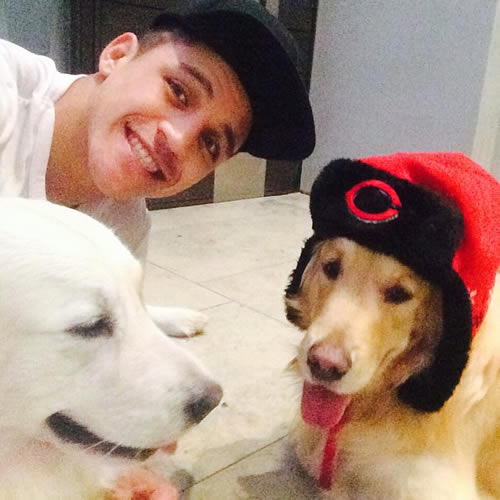 Alexis Sanchez is refusing to let his hamstring injury get him down if his social media profile is anything to go by.

The Arsenal forward sat out Sunday’s impressive 5-0 win over Aston Villa due to the muscular problem as Arsene Wenger’s men ran riot at Emirates Stadium.

However, the Chilean looked in good spirits as he posed for a selfie with his two dogs Atom and Humber on Monday evening.

Sanchez has been one of the Premier League’s standout performers since his £35m transfer to Arsenal from Barcelona last summer.

He has scored 12 Premier League goals for the Gunners in 21 top-flight games, while also notching up seven assists for his team-mates.

Arsene Wenger said after Sunday’s win that Sanchez was “not close” to being fit to feature for the Gunners.

Sanchez will be hoping to be fit for next Saturday’s north London derby clash with Tottenham Hotspur.