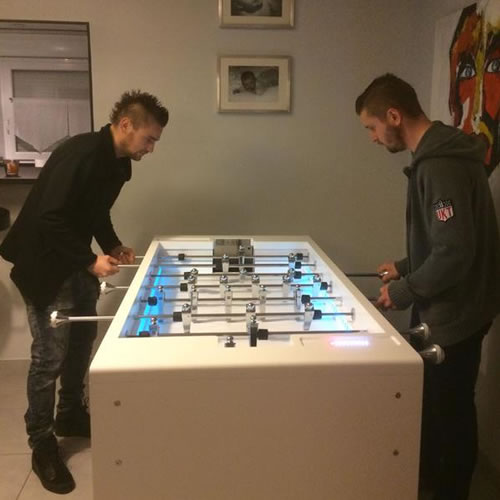 Mathieu Debuchy looks to be keeping himself busy as he continues his rehabilitation from shoulder surgery.

The Arsenal defender has been out of action since January after suffering a dislocated shoulder during the 3-0 win over Stoke City and requiring an operation.

However, the France international looks to be in good spirits on the road to recovery, as he enjoyed a game of table football with his brother Gregoire on Sunday evening.

Debuchy posted the picture above on his Twitter account on Sunday and wrote: “Great Time with my brother @GregoireDebuchy.”

The defender was ruled out for around three months after undergoing shoulder surgery last month.

He has already missed a large portion of the season due to an ankle problem following his summer transfer to Emirates Stadium from Newcastle United.

MORE: Sanchez back in Arsenal squad

Debuchy, 29, has scored one goal in 10 Premier League games for Arsene Wenger’s men so far this season. He is expected to return to action some time in April.