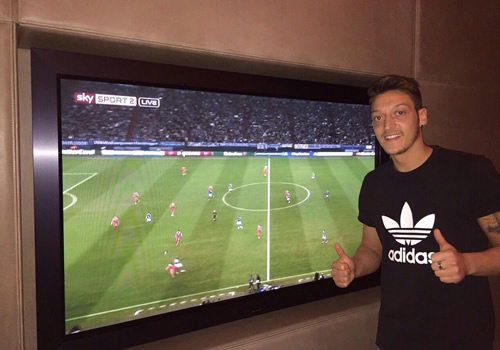 Mesut Ozil was all smiles as he took to social media on Wednesday night to post a picture of himself watching Real Madrid take on Schalke in the Champions League.

The Arsenal playmaker played for Schalke between 2006 and 2008 before joining Real Madrid from Werder Bremen in 2010.

Ozil sealed a £42.5m transfer to Arsenal from Madrid back in September 2013 but the German World Cup winner still clearly holds an affinity to his former employers.

The 26-year-old midfielder posted the picture above on his official Facebook account and wrote: “Watching my two former clubs #ucl #S04vRMA.”

Ozil has been in fine form for the Gunners since returning from a knee injury at the turn of the year.

He has scored three goals and made two assists in his last five games for the north London club, helping Arsene Wenger’s men reach the FA Cup quarter-finals.

He will be expecting to feature in Saturday’s Premier League trip to Crystal Palace.