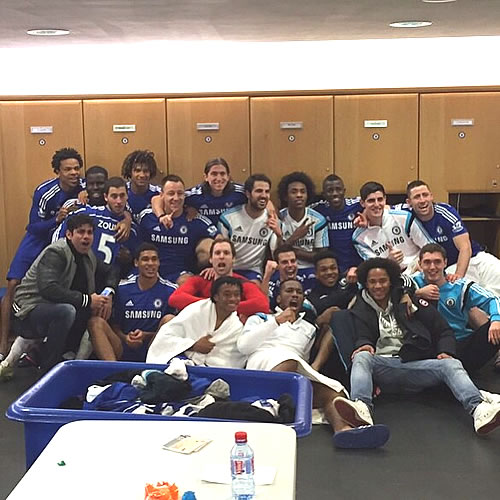 Cesc Fabregas took to social media to share a photo of him and his Chelsea team-mates celebrating their dramatic 1-0 win over Everton on Wednesday night.

With the game goalless heading into stoppage time, Nemanja Matic thought he had put the Blues ahead but his deflected strike was ruled out for offside.

Howver, moments later, Willian drilled home from the edge of the box to hand Jose Mourinho’s men victory and keep them on course for the Premier League title.

And Fabregas and his team-mates looked thrilled in the Stamford Bridge dressing room as they celebrated getting the three points.

Fabregas, a second-half substitute, posted the picture above on his Instagram account and wrote: “What a night, what a game, what a win!!!! #Teamspirit #ComeOnBlues”

MORE: 24 photos that prove Andrea Pirlo’s beard is the best in football

Chelsea’s next game is the first leg of their Champions League last-16 tie with Paris Saint-Germain in the French capital next week. They then face Burnley at home in the Premier League.