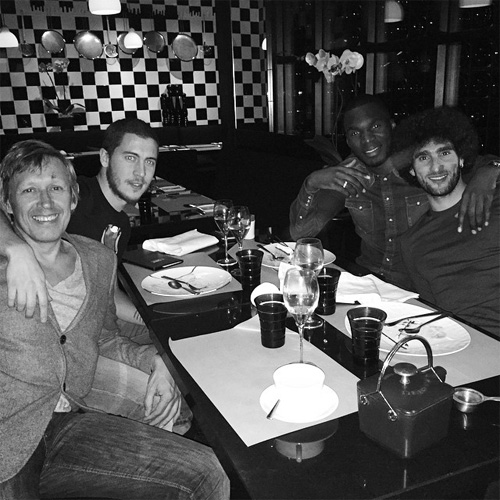 The 24-year-old signed a five-and-a-half year contract extension with the Premier League leaders yesterday, ensuring that the forward will be staying at the Blues heading into the next decade.

So presumably Hazard treated the struggling Aston Villa striker and towering Manchester United midfielder to dinner with some of his reported £200,000-a-week wages.

Hazard has been previously linked with a move to Ligue 1 champions Paris Saint-Germain, but the forward’s new deal will end speculation linking him with a big-money switch to the French capital.

The Chelsea star has scored nine goals and has made five assists in 25 Premier League appearances this season, helping the west London side cement their place at the top of the table.

Hazard joined Chelsea in a reported £32m deal from Ligue 1 outfit Lille in 2012 after he was previously linked with their rivals Manchester City and Manchester United.