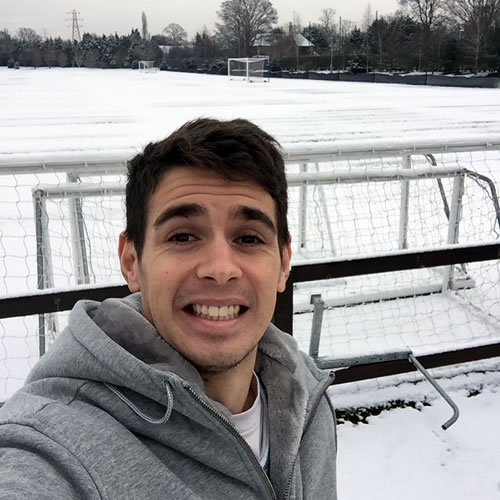 Oscar was all smiles as he posed for a selfie at Chelsea’s snowy Cobham training ground on Tuesday morning.

Much of London was covered with a dusting of the white stuff and the Brazilian midfielder was clearly excited by the weather.

Oscar posted the picture above on his Instagram account on Tuesday morning and wrote: “Good morning !!! Bom dia !!”

Chelsea were one of the busiest Premier League clubs on transfer deadline day. Mohamed Salah and Andre Schurrle both left Stamford Bridge, with Colombia winger Juan Cuadrado joining the Blues from Fiorentina in a £22m deal.

The Blues’ next game is a trip to Aston Villa in the Premier League on Saturday. Jose Mourinho’s men were held to a 1-1 draw by Manchester City in their most recent top-flight outing.

The west London club are currently five points clear of defending champions City at the top of the Premier League table.

Oscar, 23, has scored six goals and made seven assists in 19 Premier League games this season.

Arsenal must spend to challenge for next season’s title, says ex-Gunner