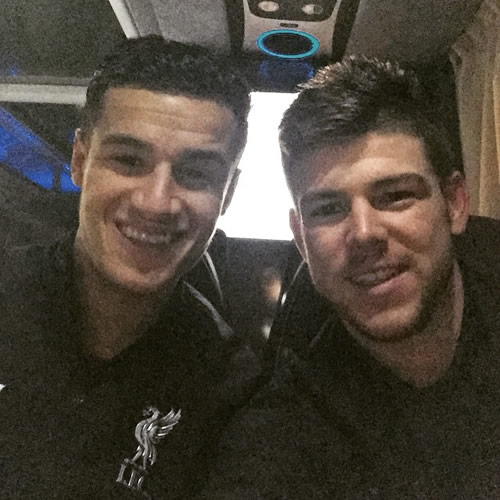 Philippe Coutinho and Alberto Moreno were all smiles after helping Liverpool book their place in the fifth round of the FA Cup on Wednesday night.

Late goals from Coutinho and Raheem Sterling sealed a 2-1 win for the Reds against Bolton Wanderers in their fourth-round replay clash.

And Coutinho looked understandably happy as he posed for a picture with Alberto Moreno on the Liverpool team bus after the game.

Moreno uploaded the photo above onto his Instagram account and wrote: “Congratulation for the new contract and for the goal today. Come on brother @phil.coutinho #liverpool #YNWA.”

The Reds appeared to be heading out of the competition after Martin Skrtel was adjudged to have brought down Bolton winger Zach Clough, allowing Eidur Gudjohnsen to break the deadlock from the spot.

Neil Danns was sent off moments later after a second yellow card, prompting a Liverpool comeback as Sterling equalised with five minutes remaining at Macron Stadium.

And Brazil international Coutinho booked Liverpool’s place in the fifth round with a stoppage-time winner.